Home » Smoking » How to Smoke a Raw Ham (8 Easy Steps)
TheOnlineGrill.com is supported by its readers. We may earn an affiliate commission at no extra cost to you if you buy through a link on this page. 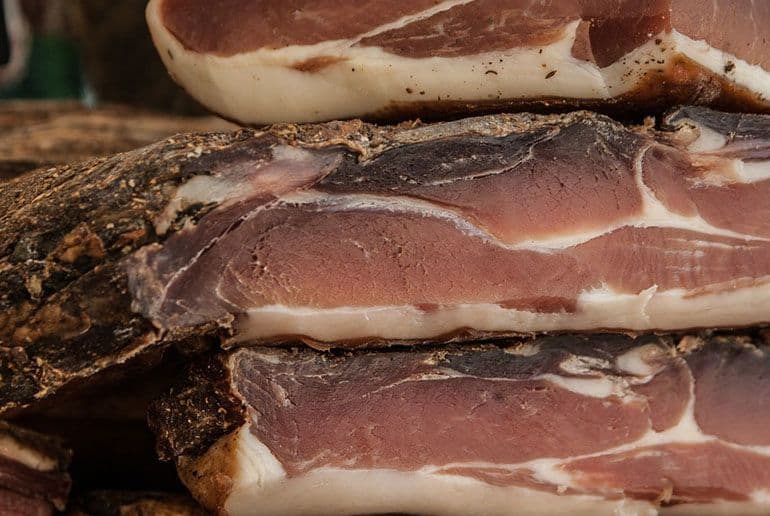 Smoking a ham on your BBQ smoker? Here’s how long to smoke a raw ham, what temperature you need, and how to prepare it.

Smoked ham boasts a delicious flavor and texture that can’t be beaten by many other cuts of meat. And while smoking ham is often thought of as a seasonal craft best done towards the end of the year, I strongly believe that there’s any excuse for doing it year round.

Smoking ham takes about 5 hours at 250°F (120°C), or until its internal temperature reaches 165°F (75°C). Smoking ham can be broken down into three easy steps: Curing, to help keep the meat beautifully juicy and give it its distinct pink color; Glazing, to keep the outside moist and packed full of flavor; and Smoking, to cook the meat while infusing it with flavor.

Smokers make for a great accompaniment to a bbq grill, so if you don’t already own one then I urge you to take a look at my smokers buyers guide. You won’t regret the investment.

Of all the ways of cooking meat, I much prefer to cook it in a smoker. Understandably, time can put considerable constraints on this, so is not something we can do every day, however if you compare a smoked ham with an oven cooked ham there’s just simply no competition.

There is a bit of craft to smoking meat, so be sure to take things easy if this is your first time. Different cuts require different smoking approaches, so definitely be careful with the amount of wood and charcoal you use. Too much of either can completely overpower the flavor of the meat. It’s definitely a case of too little is better than too much.

Here are my 8 easy steps showing you how to smoke a ham.

#1. How to choose the best ham for smoking

Let’s start things off by choosing our meat cut. The majority of ham cuts come from the rear leg or thigh portion of the pig, and when they’re bought in a supermarket they tend to be either smoked or cured. 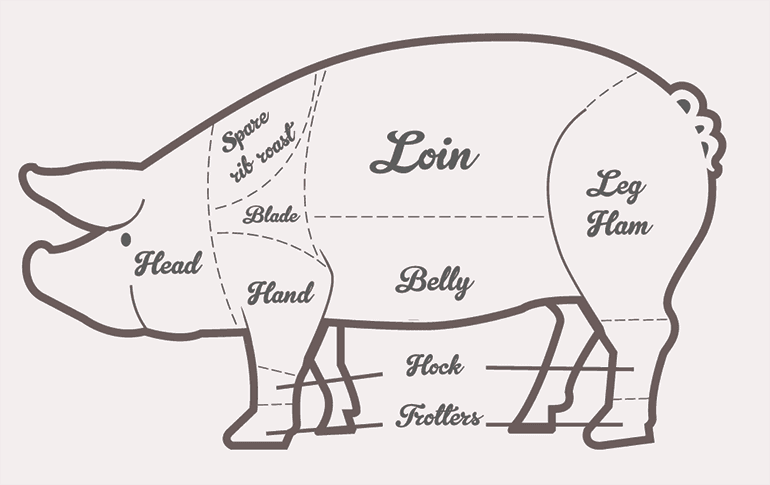 Let’s start things off by choosing our cut of ham. The majority of ham cuts come from the rear leg or thigh portion of the pig, and when they’re bought in a supermarket they tend to be either smoked or cured.

I recommend buying from a butcher so that they’re raw, however if you don’t have this option then go for cured, in which case you can ignore our next step and go straight to basting.

Make sure that you pay attention to the size of the ham. Half hams always work best for smoking. One reason for this is that its modest size makes smoking it more manageable, and the other is that it actually has more exposed surface area to cook.

If you’re feeding a large group then by all means get a whole ham, but ask your butcher to slice it in half.

Try to avoid any of the following:

Low-sodium:Ham is best enjoyed salty, and in reality a lot of salt naturally secretes from the meat while basting or smoking. Low-sodium varieties of ham just tend to be really flavorless and have far too little salt.

Smoked Ham:This might seem an obvious thing to avoid, but worth pointing out nonetheless. These are often pre-slow smoked or even injected with a smoke flavored liquid. If you smoke these yourself then they’ll just turn out a bit… nasty.

Curing is a term that gets thrown around a lot, but in my experience it tends to be a word that relatively few people actually know the meaning of.

In most cases curing refers to dry curing, which is a way of drying meat so that it lasts longer. However in the case of smoking we want to wet cure it. While this doesn’t dry the meat out, it helps stop warmer temperatures from encouraging bacteria to grow on the meat. Obviously in the case of smoking, this is exactly what we want. Plus, it also helps give pork its unique pink color.

Curing is actually not always completely necessary, so don’t worry if you don’t have the time or resources to do it. However to keep the meat flavor to its absolute best I strongly recommend it.

We start curing by creating a curing brine.

Instead of dry curing ham with salt or sodium nitrite, we’re doing to wet cure our meat with a brine. This process can actually take about a week, so be prepared to play the long game here. However, I promise you – the results are worth it.

With a brine, the liquid seeps into the meat and keeps it moist while its salt and sodium nitrite content cures the meat. This not only turns the meat a beautiful pink but also kills harmful bacteria.

In a large saucepan, bring a gallon of water to the boil and mix in the following ingredients:

Once brought to the boil, allow it to cool completely. Now we have our bine.

#4. How to brine a fresh ham for smoking

Brining meat requires wrapping the ham in a bag, however obviously a freezer bag isn’t going to be big enough for our large ham half, so we specifically need a brining bag (you can get them here on Amazon). 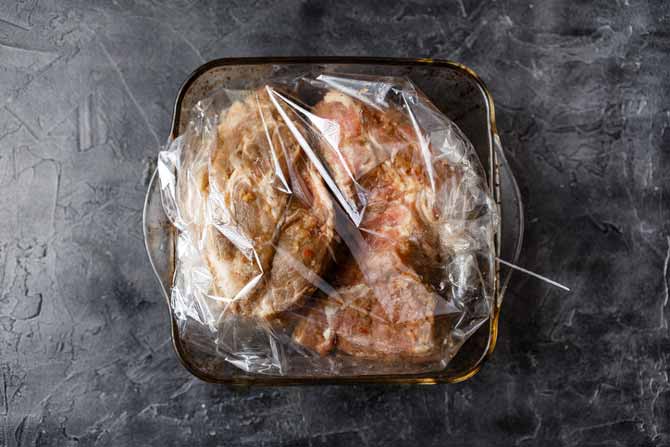 Put your meat in the brining bag and add the curing brine (make sure it’s completely cool). Also add between half and a full gallon of cold water. This will help dilute the brine while also ensuring the mix covers the ham.

Mix all of the contents of the bag with a long-handled spoon to help make sure that the brining ingredients don’t all gather at one end of the pack.

Place the brining bag with its contents in your refrigerator. Brining time will depend heavily on the quantity of meat in one cut, but a useful guide is one day for every two pounds of ham.

While the ham rests in your refrigerator, on one or two occasions use a marinade injector to inject some brining liquid into the meat. Do this in several spots across the ham. This will help ensure that the brine, and particularly its salts, get deep into the meat, making it as consistently delicious as possible.

Check out my full guide to injecting meat for smoking here.

Place the ham on a cooking grate to drain for a few hours. I recommend using a food fly cover to help protect the meat while it’s draining.

Once drained, wipe off any excess brine or liquid from the meat with a paper towel. Put the ham back in the refrigerator until you are ready to cook it.

If you’ve done any kind of bbq smoking before then you’ll know how important it is to get your wood selection right.

Curing, brining, and basting all contribute significantly, but if you get your wood selection wrong then your meat will just taste… weird.

Different woodchips have different flavors and aromas, which give you a fantastic amount of flexibility when it comes to your ham’s final flavor profile.

Many BBQ and smoking enthusiasts have their own favorite wood chips, and certain woods match perfectly with specific types of meat.

There are choices like apple, oak, and peach. However what I recommend for smoked ham is pecan.

Pecan wood provides a subtle nutty flavor that manages to give off a beautiful aroma without overpowering the star of the show: The ham.

All smoked hams are greatly enhanced with a delicious glaze. A good glaze adds a lovely touch of extra flavor to the outside shell of the meat while also absorbing some of the smoke. 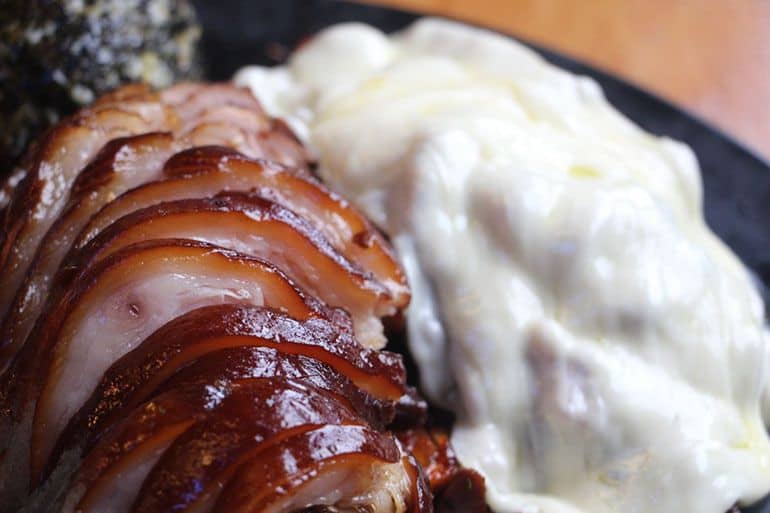 I recommend a sugar-based glaze as it will cut through the salt of the meat and brine perfectly.

Heat up a saucepan on medium heat, and mix in:

Stir continuously while the butter melts and the other ingredients dissolve. Usually 3-4 minutes. Combine properly and remove from heat.

When smoking, the best arrangement is placing the shank half on your smoker’s top rack, and the butt half beneath it on the bottom shelf.

We’re going to start off slow, so heat up your smoker to around 250°F/120°C. Place the meat in the smoker with the fat side up. Close the lid and leave to cook for two hours.

Once into the final hour of cooking, apply the glaze to the ham. Spread the glaze on generously and repeat every 15 minutes, giving you four layers of glaze in total.

Be careful not to go over one hour for the glaze because it’ll then be prone to burning.

Once the ham’s internal temperature hits 165°F/75°C, remove it from the smoker.

How long does it take to smoke raw ham?

If we don’t include the time you need to brine and cure it, and only consider the smoking time itself, then smoking a fresh ham takes about 30 minutes per pound of meat. This might not sound like much, but most half hams tend to be around 10 pounds, while whole hams are often around 20 pounds in weight. This means that average smoking times can take anywhere between 5 and 10 hours.

Can you smoke a ham that is already fully cooked?

Technically yes, but I’d recommend against it because there is a very high possibility of ruining your ham by destroying the flavor and drying out completely.

What is the recommended internal temperature for smoked ham?

It is okay if the temp is actually slightly below that as the meat will continue to cook by itself for a few minutes after you turn off the smoker.

Should I brine ham before smoking it?

Brining is actually optional. Some people like to brine the ham before smoking, some other don’t. Brining your cut will make it even juicer and tastier as brine plays an important role in retaining moisture as the meat cooks.

Should I use aluminum foil to smoke a ham?

You don’t need to use aluminum foil to smoke a ham. Using a cooking tint foil will change the flavor and texture of the meat because foil changes the amount of smoke that permeates the meat. Using tin foil, will result in a less smoked flavor ham but actually a bit more moist. As I mentioned in the smoking part of this article, you can use tint foil to wrap the ham during the last hour of cooking for it to become a bit more juicer and retain the moisture better. 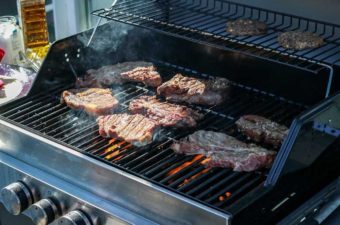 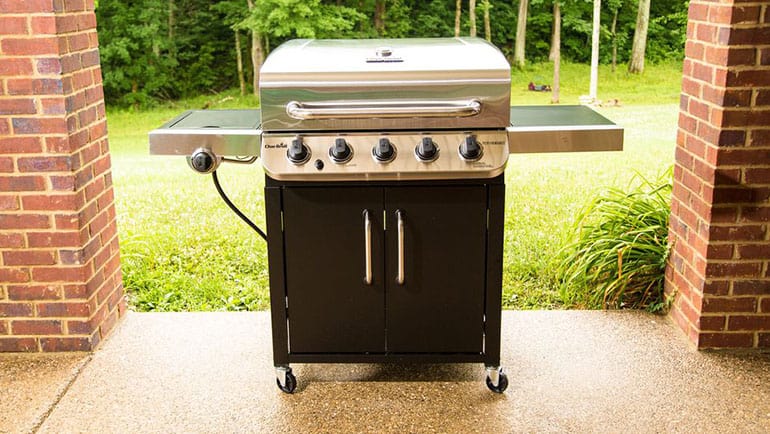 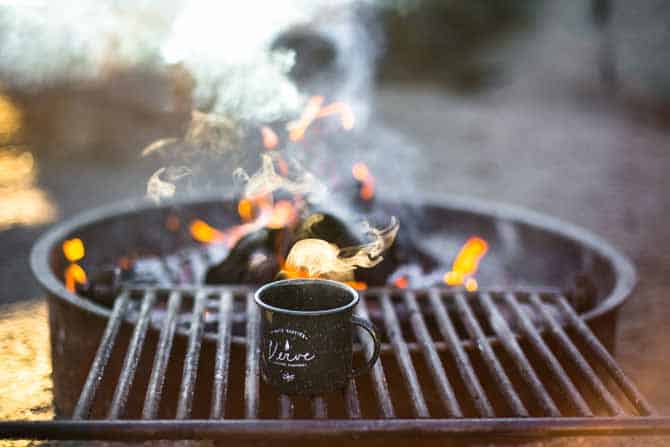 TheOnlineGrill.com is a participant in the Amazon Services LLC Associates Program, an affiliate advertising program designed to provide a means for sites to earn advertising fees by advertising and linking to Amazon.com. *Amazon and the Amazon logo are trademarks of Amazon.com, Inc., or its affiliates. Additionally, TheOnlineGrill.com participates in various other affiliate programs, and we sometimes get a commission through purchases made through our links.
1.9Kshares