Home » Grilling » Traeger Tailgater Pellet Grill | Reviewed
TheOnlineGrill.com is supported by its readers. We may earn an affiliate commission at no extra cost to you if you buy through a link on this page.

Tailgate grills need to be portable and easy to use, without being weak or flimsy. How does Traeger compare? Does this entry to the tailgate scene enough to make fans switch to wood? Let’s take a deep dive in our Traeger Tailgater Pellet Grill review. 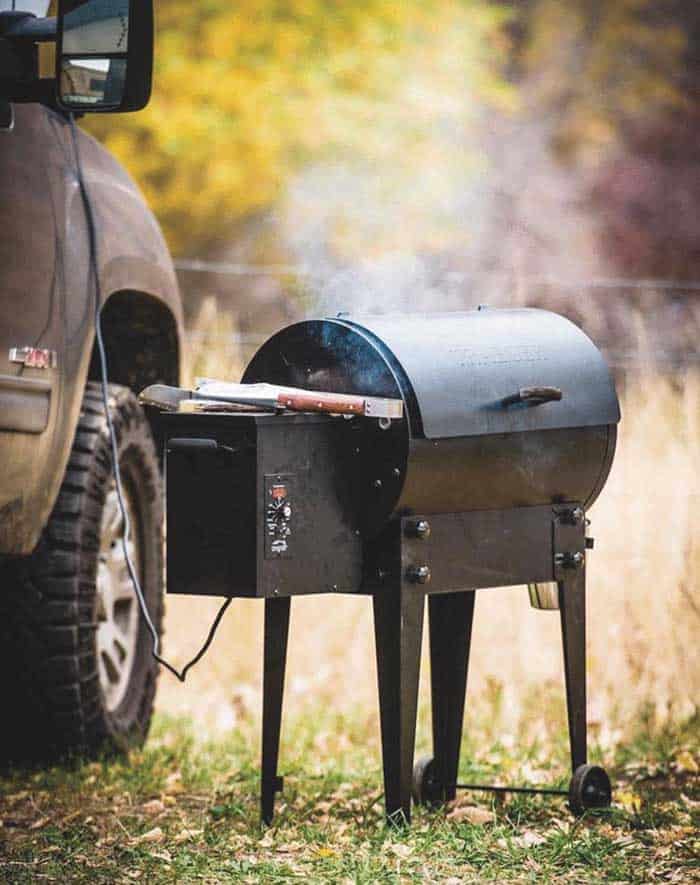 Check it out on Amazon.com

This new entry to the tailgate scene will get the attention of tailgaters across North America.

While tailgate grills are nothing new, one that is built around wood pellet grilling is definitely a bold new entry to the scene.

Wood pellet grilling offer incredible high temperatures, enhanced flavors, and a cleaner burning fuel source that doesn’t pack in anywhere close to the same amount of carcinogen that coal does.

Up until recently, anyone wanting to use a wood pellet grill would have to lug around a full sized model. If anyone’s tried this they’ll tell you never to do it again.

Similarly, a lot of tailgate grills are shaky, weak, and don’t offer anything close to the power or space that their home counterparts do.

So what makes the Traegar Tailgater any different?

True to its name, its main objective is to give you a grill that’s portable and easy to use.

While its cooking surface is not a lot bigger than other grills, beneath its cooking racks it has enough cooking power for anyone to take notice. It isn’t a weak gas or electric model, but rather a wood-fuelled beast that gives you all the pleasures of grilling or smoking over real wood fire but for a fraction of the cost, and on a more stripped back grill.

Beyond giving you a genuine wood pellet grill within a compact grill size, it also offers all the traits that we have come to expect from a Traegar grill. It has a fantastic durable build despite its more modest size, and is built to get maximum heat efficiency from its fuel source.

Its cooking surface may be smaller than Traegar’s other grills, but at 300 square inches this compares well to many other tailgating grills. It’s nothing to be sniffed at, and for that alone it should be on your shortlist for your next portable grill.

In real terms, 300 square inches translates to about 18 hot dogs in one go or 12 hamburger patties. Certainly nothing to be sniffed at.

A lot of grills offer you either good portability, or a strong build. However Traegar offer you both. Weighing at 62 pounds, it’s fairly easy to pack up and offload. It’s also good sized enough to be able to store in the back of your car.

Its weight and size also make it good for grilling on small patios or apartment balconies, or even taking camping with you.

In relative terms compared to other brands, Traegar are still a relative newcomer to the scene. They were at the forefront of the wood pellet revolution at the turn of the century.

While this might mean that some purists turn their noses up at them, this does mean that Traegar have always put ease of use first with their grills and smokers.

I’m glad to say that the Tailgater is no different. It has a digital automatic starter that’s simple to use, helping your grill to get going in mere moments. You simply fill up the grill’s hopper (a mechanism that holds pellets before feeding them to the auger into the grill) and press go.

The grill’s hopper can accommodate 8 pounds of pellets, which is an impressive amount for a grill of this size.

I’ve mentioned power being a hallmark of not just Traeger, but wood pellet grills more broadly. This is put into practice brilliantly by this grill.

Despite its small size, it can generate power equivalent to about 19,000 BTUs, which is more than enough to barbecue for any sustained period of time.

It has a built-in temperature probe to help monitor and moderate heat levels while cooking, ensuring that you don’t stray more than 20 degrees over or above your target temperature.

However, I wouldn’t blindly trust this. Being a largely analog form of cooking, it’s inevitable that there will be temperature fluctuations and no automated system will be able to prevent this entirely. Keep a keen eye on heat levels and be prepared to step in adjust the heat manually if you see a big swing in temperatures start to happen.

Because of this, I wouldn’t use this grill for smoking. Despite what Traeger might say, the Tailgater is too prone to wild temperature fluctuations to be reliable enough to do good BBQ smoking.

It is fantastic for grilling though, where these fluctuations are nowhere near as disruptive. It can excellent temperature levels, and doesn’t experience the same level of cold spots of flare-ups across its surface that charcoal or gas grills sometimes encounter.​​​

For me this is a big win, as for me smoking isn’t as much of a key concern at a tailgate as grilling is.

Also to be noted is that even though there were temperature swings, beyond this the grill does maintain temperatures very well. As a result, the need to turn or redistribute food on the grates was minimized, and the Traeger Tailgater was allowed to do its thing and keep to our target heat relatively well.

One thing to keep in mind is that the grill will need a power supply, usually from a regular 120-volt socket. If power input is a concern, the grill needs about 300 watts for its first few minutes as it heats up before then just decreasing to 50 watts once it has ignited and reached ideal cooking temperatures, where the fire from the pellets takes over.

So a power source will be an important thing to keep in mind, whether this is a direct input from home, or from your car. You can even get a propane generator.

​What wood pellets do I need for the Traeger Tailgater?

While technically any wood pellets can do, Traegar specify that use of any other brand other than their own will void the warranty should the grill run into any problems. ​While I don’t personally agree that other brands are less reliable, I’d err on the side of caution and get their own brand.

Fortunately, these are easy to get and reasonably priced. Check out these Traeger wood pellets on Amazon (affiliate link). 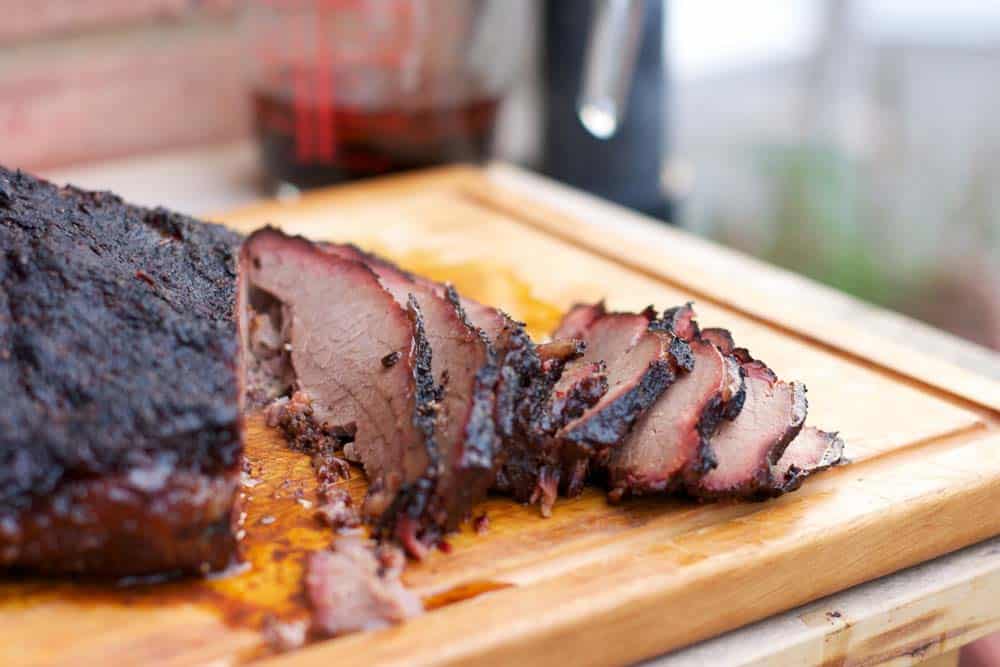 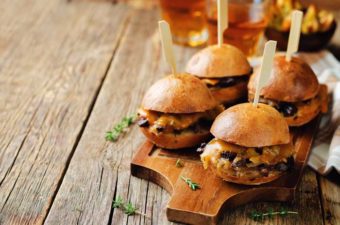 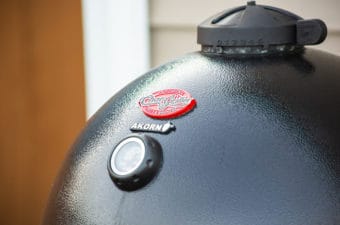 TheOnlineGrill.com is a participant in the Amazon Services LLC Associates Program, an affiliate advertising program designed to provide a means for sites to earn advertising fees by advertising and linking to Amazon.com. *Amazon and the Amazon logo are trademarks of Amazon.com, Inc., or its affiliates. Additionally, TheOnlineGrill.com participates in various other affiliate programs, and we sometimes get a commission through purchases made through our links.