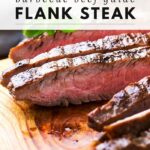 Flank steak is a delicious beef cut perfect for grilling. From meat prep to cooking techniques, discover everything you need to know about this flavorful beef steak.

Flank steak is one of the most popular beef cuts on the market, but what is flank exactly and why do so many people buy it? In this guide, you’ll learn everything you need to know about flank steak, how to buy and cut it, what some substitutes are, and how to grill and enjoy it.

What Is Flank Steak?

Flank steak is a tough cut of meat, usually about one inch thick and a foot long. It’s noticeably more fibrous than most other types of steak, and most people either marinade it or add sauces.

This steak works well for techniques such as barbecue because it cooks best hot and fast. It’s also relatively affordable, despite its popularity, because it’s easy to cut into small pieces and use with other dishes such as fajitas and stir-frying.

Flank steak has a rich beef flavor but almost no fat, aside from a little around the edges. The fiber-like muscles are far more prominent here, but the proper cooking will break apart the tougher tissues and create a more tender cut.

What Part of the Cow Is Flank Steak?

Flank steaks come from the dense abdominal muscles on the bottom side of a cow’s belly. A typical flank steak comes from behind the plate, ahead of the shank, and just below the short loin and bottom sirloin.

This area sees some of the most use in the cow’s body, which is why flank steak is naturally tough. Cooking methods aim to minimize toughness by tenderizing and softening the thick fibers.

How to Buy Flank Steak

Look for flank steaks that are as flat as possible. Most flanks are slightly thicker in the middle, but flatter is better. Look for dark red cuts without other dark spots or holes. Avoid cuts with brown areas, which indicate there’s been too much exposure to the air.

Good flank steaks often have a small number of connective tissues or a little fat on the end. Otherwise, you should not see much fat on the cut. Flank steak has almost no fat, so if you see too much, it was cut improperly. Look for even edges and avoid any pieces with rough areas.

Flatness matters for this cut because it determines how fast each area on the steak will cook. If only the middle of the steak touches the grill, it could cook through more quickly than the outer parts.

You can trim a little away from this steak to make it flatter if necessary. However, getting the flattest cut you can from the store is better.

How to Cut Flank Steak

Before cooking, cut off the thin membrane if it still exists on your flank steak. In some cases, you can pull it off with your fingers. If that doesn’t work, use a knife to cut it away. Properly cut flank steak does not need further trimming.

After cooking, let it rest for 5-10 minutes. This gives the meat time to settle and bring out its best flavor. After waiting, cut it against the grain and at a 45-degree angle downward. This helps separate the fibers and makes them easy to tear apart and eat. Never cut flank steak with the grain because that will make it too chewy.

Here are some substitutes if you can’t find a flank steak.

Skirt steaks also come from the cow’s abdomen and are fundamentally similar to flank steaks. This makes them the most popular substitute.

A skirt steak is long and thin, with visible muscle fibers and a row of fat along the top. It has a deep beef flavor and marinades well, making it a good choice for fajitas.

The main difference between skirt steak and flank is that skirt tends to be longer and a little thinner than flank. This means you should cook beef skirt for less time. It also has more fat, which you should trim to show most of the meat surface. Leave the deeper marbling, which will add flavor when you’re cooking.

Skirt steaks are uncommon cuts in many areas. If you don’t see one out, ask the butcher if they have any available. This cut is often used for Mexican dishes, including fajitas and carne asada, so it’s more common in southern areas of the United States.

Hanger steak is a delicious alternative to flank steak. This cut comes from the cow’s diaphragm, an area that does minimal work. It’s easily recognizable because it has a long streak of inedible fat down the middle. Hanger steak is also one of the most tender cuts of beef, surpassed only by the tenderloin.

Hanger steak goes best grilled, cooking quickly at about three minutes per side. Like flank steak, it does well cooked to medium-rare and resting for about 10 minutes before cutting against the grain.

Hanger steak is one of the hardest cuts of meat to find. Each cow only produces one of these, and most go to restaurants. It’s sometimes known as the “butcher’s cut” because butchers often keep it for themselves.

The easiest way to find a hanger steak is by ordering it from a specialty butcher. Consider calling ahead and reserving this cut, then picking it up the day you plan to use it. This cut can demand high prices at fine restaurants, but small butchers usually set reasonable prices.

Flat iron steak is a tender cut from the chuck, which is the shoulder area on a cow. This area features meat with a rich and meaty flavor, comparable to flank steaks. The butchering method removes internal connective tissues, leaving a well-marbled cut suitable for grilling.

Like most other thin cuts, flat iron is best when cooking it to medium-rare. Outside of grilling, it’s suitable for broiling and pan-frying. Some people cook it by pan-searing or sous vide. Regardless of cooking method, flat iron has a slightly more chewy texture than other top cuts.

Tri-tip steak comes from the bottom of the sirloin. Each cow only provides two tri-tips, making it moderately more common than the hanger steak. This is a relatively large, boneless cut, so it is easy to prepare.

Tri-tips normally come with a fatty side. You can trim off some before you cook it, but leave some on while you’re cooking it for a better flavor. Remove the fatty parts after cooking.

Tri-tip takes longer to cook than the other options in this guide, requiring about eight minutes on each side for an average two-pound roast. Cut it against the grain on each side to get two large cuts, then carve each section separately to serve.

What is flank steak interchangeable with? Flap steak is one of the top contenders for this position, serving as an excellent replacement for flank steak in most recipes.

Depending on your location, these steaks come from the bottom sirloin area and might also be known as sirloin tips. It’s often cut into cubes or long strips, but you can ask butchers for the whole steak.

Like most coarse steaks, flap steak works well at holding flavors from marinades. It has a rich beef flavor, so you might not need anything beyond salt and pepper. Try cooking this meat to just less than 140 degrees, as it has more flavor closer to medium than rare.

How to Grill Flank Steak

What is flank steak if not for grilling? Preparing this cut to grill is relatively simple.

For a regular grill, preheat it to high and add some oil to the grates. This will help stop the cut from sticking to the grill. Most grills are about 450 degrees on their high setting.

Cook the steak for 3-5 minutes on each side. The interior should be 130-135 degrees to cook it to medium-rare. A temp of 125 degrees isn’t hot enough and 140 degrees is too much. It might take some experimentation to determine exactly how long to cook a flank steak on your grill.

There are many ways to enjoy a flank steak. Most people marinate the steak for several hours before grilling. This can impart a lot of added flavor while helping tenderize this tough cut before cooking. The rich connective tissue in the beef also makes smoked flank steak a great way to achieve tender, flavorful barbecue meat.

Flank steaks are also a popular cut for fajitas, which typically include other grilled ingredients inside a tortilla.

Flank steak also works for a steak sandwich if you cut it thin enough. Choosing a bread with a similar toughness can provide a more consistent experience when eating flank steak this way. 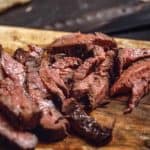 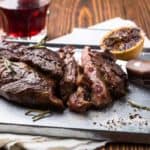 Reverse Seared Flank Steak - How to reverse sear flank steak on the grill. This steak recipe is the perfect BBQ dinner. ... 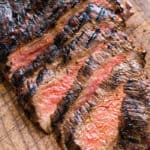 Flank Steak vs Skirt Steak: Which One is Best? (4 Big Differences) - Flank and skirt steak are two amazing tasting meats. But which one is best? Find out the differences so you… ... 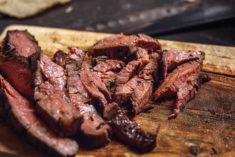 Flank Steak vs Skirt Steak: Which One is Best? (4 Big Differences) 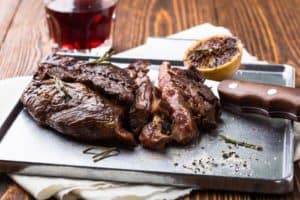