Resting meat fresh off your grill or smoker can make or break your meat’s taste and texture. Discover the food science behind the popular cooking technique and how to rest meat right.

When it comes to good barbecue, patience is a virtue that any budding cook needs to adopt. From getting your grill properly prepared and up to temperature to making sure you keep the lid closed to allow stuff to properly cook – you just can’t rush good barbecue.

Surprisingly, the concept of resting meat has been a somewhat touchy subject, especially amongst steak fanatics. We’re not ones to shy away from some cooking controversy – so let’s take a closer look at what meat resting is, the science behind it, and if you should be resting your perfectly grilled steak or not.

What is Meat Resting?

Meat resting is where you allow cooked meat to sit for a period of time, away from the heat source it was cooked on, before cutting into it and serving.

It is a practice adopted by many people when cooking meats to help the meat retain more moisture and flavor and ensure that the meat doesn’t become overcooked (particularly important when you are cooking steak).

All meat will lose moisture when it’s cooking; that’s a given and something we often try to prevent from happening too much. For example, wrapping a brisket when smoking helps prevent ‘the stall’ and ensure we don’t lose the delicious juices from inside the meat. No one likes dry meat. In fact, in some cases where we’re worried meat might be dry, we inject marinade directly into it before cooking!

Why would we go to all that trouble to make sure the meat we’ve cooked is moist and well flavored just to spoil it all and spill all those juices when it comes to serving it up?

The Science Behind Resting Meat

To understand the science of resting meat, we first need to look at why we cook meat. Other than the fact that cooked meat tastes better (and is safer to eat) than raw meat, we cook meat at high temperatures to dissolve the fats and proteins in the connective tissue. If these aren’t dissolved, you end up with chewy, sinewy, and fairly bland-tasting meat – the delicious flavors and textures all come from making sure these fats and proteins are cooked to the point of melting into the surrounding meat.

The only issue with this is that if we are cooking meat to a point where these fats and proteins melt and then cut into the meat as soon as we take it off the heat, there is nothing to stop these tasty liquids from escaping the meat.

When you rest meat, you allow the overall temperature to cool slightly before cutting into it, meaning that the liquids in the meat have a chance to slightly solidify and thicken up. That way, if they do escape when you cut into it, it at least happens a bit more slowly, and you don’t risk losing them all onto the chopping board.

The concepts of resting and holding meat sound very similar, they both involve waiting for a period of time to serve your meat once it has been cooked, but the reasons for them and the way they are done is where there is a difference.

Resting meat involves taking it off the heat and allowing it to sit at room temperature for a period of time. This allows the internal temperature to come down to a point where the liquids inside have started to solidify; that way there won’t be as much lost when the meat is cut into.

The aim of resting is to have meat sit for just a short period (so that it is still at a satisfactory temperature to eat) so that the internal temperature has reached a point where the juices in the meat start to thicken up and won’t be lost when the meat is cut into to be served and eaten.

Holding meat is where you remove it from the heat where it has been cooking but then ‘hold’ it at a steady, low temperature for a prolonged amount of time. This is often done with foods such as brisket or other foods that can take a very long time to cook; they are prepared in advance and held until they need to be served.

There are a number of ways to hold meat – you can get ‘holding ovens’ specifically for this purpose (although they are generally used in commercial kitchens); it’s also possible to hold meat in your oven at home by setting the oven temperature low and wrapping your meat in butchers paper or tinfoil.

Another method favored by a lot of brisket enthusiasts requires a cooler box and towels or blankets. First, the brisket is covered with foil or butcher paper and then wrapped in several towels to insulate the heat. This bundle is then put inside a cooler box with the lid closed, where it’ll stay at a relatively steady temperature for several hours.

While the science behind resting meat seems to hold up pretty well, there are some people who disagree with it and don’t believe that resting meat does much at all – especially when it comes to steak.

Is Steak the Exception to the Resting Rule?

When cooking steak, especially those to rarer doneness, it’s vital that you take it off the heat at the right time to avoid overcooking.

The issue with resting meat is that even if you are taking it off of the heat and leaving it to sit, the heat doesn’t dissipate from meat or any food immediately (you know this all too well if you’ve burnt the roof of your mouth on molten cheese from a pizza!). Whilst the outside of food is still hot, it can continue to cook the inside of the food; this is why some recipes suggest taking meats off the grill once the internal temperature hits a few degrees lower than you are aiming for, as the residual heat will continue to raise the internal temperature for a few minutes.

The thing is, you don’t necessarily want this to happen with a steak. Firstly, there isn’t an exact science to resting meat, so if you get it wrong, you can end up with a steak that is either overdone or underdone. Secondly, steak should be eaten hot; if left to cool for too long fats can get waxy or chewy and crusts or rubs that have been applied can go mushy.

There have been numerous studies and experiments done to prove or disprove the notion of resting. One important thing to consider is that we can only really measure the amount of water/liquid lost with these experiments and not the juiciness of the meat (juiciness is a pretty subjective scale and personal preference after all!).

Prof Blonder conducted an experiment on two ribeye steaks – both of equal weight and thickness and prepared in the same way. Both were cooked in the same manner to 125f and medium-rare doneness.

One steak was immediately cut into strips, and the juices from the chopping board and surface of the steak were soaked up with a paper towel which was then weighed on a scale. The unrested steak lost around 1ounce of weight through this process.

The other steak was rested for 30 minutes before being cut into; it’s worth noting that the rested steak had already lost some juices in those 30minutes even before being cut into. After the meat was cut up, the same process was repeated, and all the juices were collected with a paper towel that was then weighed.

The rested steak lost around 0.85 ounces of liquid which is just a 0.15-ounce difference. The main point that this experiment recorded was that the steak that was left to rest had a rise in internal temperature (thanks to carryover cooking) to 145f, which resulted in the meat cooking to well past medium-rare.

Food blogger Helen Rennie conducted a similar experiment but instead collected the juices off of the plates of a rested and unrested steak and weighed it. Again, the results showed very little difference in the amount/weight of juices released for both steaks.

So…To rest or not to rest? That is the question.

When it comes down to it, as with quite a few things in cooking, it’s down to personal preference and what you believe tastes the best or gives the best results.

Aside from steak, it’s generally agreed that all cuts of meat benefit from resting once cooked. The main difference is over how long certain meats should be left to rest and what effect carryover cooking might have on them. The general rule of thumb is the larger the cut of meat, the longer it needs to rest. People offer various equations to work out timings for how long meat should rest; a popular one is ‘1 min resting time for every 100g of meat’, but the easiest way to test if your meat has rested long enough is by taking the internal temperature.

Ideally, you want to allow the internal temperature to cool to the point of 49c (120f) to avoid losing too much juice when cutting into it.

How to Rest Meat

Although the science around it is fairly in-depth, the actual act of resting meat is simple.

Do you need to cover meat when resting?

Covering meat when it’s resting isn’t a rule you have to stick to; some people prefer to leave food uncovered, while others like to keep it covered if they are cooking outside or somewhere where it is particularly cold.

The main thing to remember is that if you do cover your meat when it’s resting, you want it to be a tent shape over the top of it. You don’t want to tightly cover meat that is resting as it will actually have the opposite effect and cause the meat to lose moisture through sweating.

Does meat keep cooking while resting?

Meat will continue to cook even after being removed from the heat and resting, thanks to something called ‘Carryover Cooking’.

What is carryover cooking? 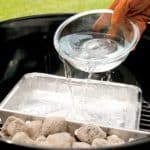 Smoker Water Pans (How to Use Them & Why They Work) - Adding water to your smoker might seem counter intuitive, but using a water pan is one of the best ways… ... 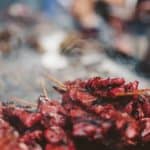 13 Best Meats to Smoke at Your Next BBQ (Infographic) - From best woods, to cooking times, to target temperatures, here's everything you need to know to choose the best meats… ... 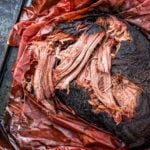 Butcher Paper vs Parchment Paper - Butcher paper and parchment paper are both loved by barbecue pitmasters for wrapping meat to help get the best results.… ... 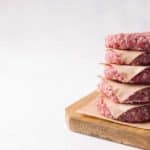 Can I Smoke Frozen Meat? [Burning Questions] - If you've left everything to the last minute then you might need to smoking your beautiful cut of meat straight… ... 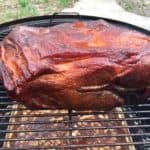 What is the BBQ Stall? - The BBQ stall is a problem familiar to every pitmaster. Knowing how to overcome it is the key to perfect… ... 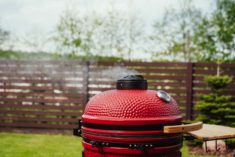 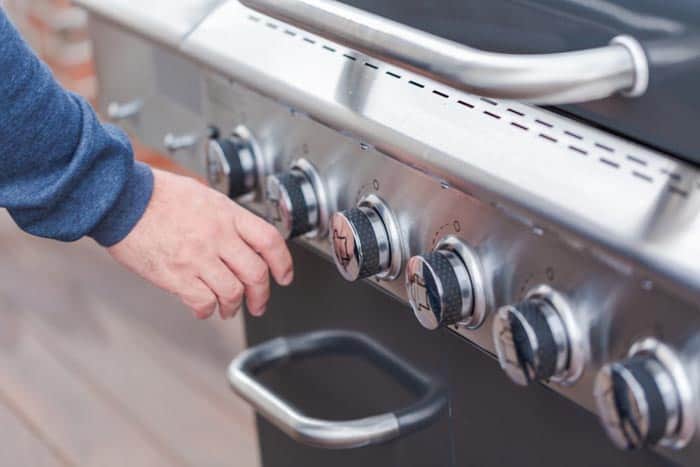 How to Use a Gas Grill 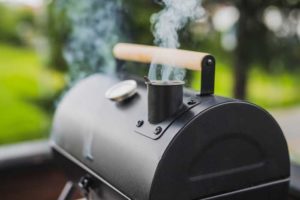 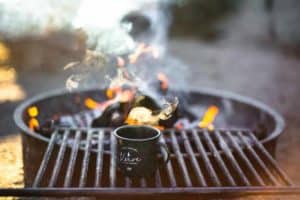 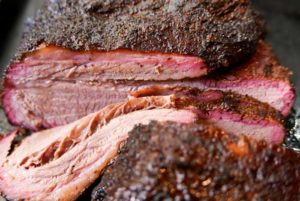 Smoke Ring: How to Get it Right