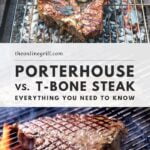 Porterhouse and T-bone steaks are two of the world’s best prime beef cuts. But which should you choose? Whether you prefer filet mignon or New York strip, here are the differences you need to know.

Many people might tell you that both T-bone and porterhouse steak are the same, but this isn’t true. Sure, they both have that ‘T’ shape and have similar fat compositions, but there are big differences between them.

Yes, they both come from the short loin of the cow (the section that sits between the cow ribs and the sirloin).

Where They Come From

Both T-bone and Porterhouse come from the short loin of the cow. This area of the cow has a T-shaped bone that runs through the middle (called the lumbar vertebra), which you can see in both cuts of beef. As a result, both steaks look almost identical.

T-bones are cut from the front of the short loin, whereas Porterhouse come from the back. As a result, Porterhouse steak carries more tenderloin.

Each carries a New York Strip on one side and a tenderloin Filet Mignon on the other.

What really separates the two is the size of the tenderloin section on each. The U.S. Department of Agriculture has stated that any cut with a tenderloin section at least 1.25 inches in width (source) should be classed as a Porterhouse steak.

As a result, any steak with a tenderloin section between ½ inch and 1.25 inches is defined as a T-Bone. Anything shorter than this is usually classed as a bone-in strip.

It’s a very technical definition, so it’s easy to see why the two are often confused for one another.

We all know that steaks that carry the most meat tend to cost more, so it should come as no surprise that Porterhouse is more expensive than T-bone.

Porterhouse has more tenderloin, one of the most tender and delicious types of beef you can get.

It depends. This is a boring answer, I know. But it does come to how many you’re cooking for and what you value in a good piece of steak.

The only real difference between the two is the amount of filet tenderloin on each, so there might be instances where Porterhouse might be too much.

If you are just cooking for yourself, go for T-bone. It’s more than enough meat to satisfy for one and will still give you a good cut of New York strip and filet.

If you are cooking for two, go for Porterhouse. The added filet mignon should give both you and a guest a good serving of New York strip and filet each, and it should work out as more economical to share between two.

Anyone who has bought meat regularly will tell you that no two cuts of the same meat are created equal. It’s not uncommon to buy two T-bone steaks only to find that they’re very different in size and thickness. So here’s what to look out for to make sure you get the best possible for you.

Once you have decided if you want T-bone or Porterhouse, make sure that the strip side of the steak is a good size. Most people focus on the filet side so much that it’s easy to dismiss the strip side, only to end up with a thin cut of meat.

Try to make sure that there isn’t a lot of connective tissue through the strip steak, particularly in Porterhouse. Some Porterhouse cuts are cut too close to the sirloin section of the cow, which means that the meat can contain a lot of tough sinew. This is a much more heavily used muscle, which means the meat can be a lot tougher and chewy, and doesn’t contain a lot of flavor. As a result, you run the risk of paying Porterhouse prices for poor quality meat.

So look out for wide, generously sized cuts of meat with little sinew cross-sections. If you’re left with the choice between a medium cut with good marbling or a large cut with lots of sinew, always go for the smaller piece.

How to Grill Porterhouse or T-Bone

Despite being from the same part of the cow, the composition of the two steaks is different enough that you will need to treat them (slightly) differently.

Filet tends to contain less fat, so will cook faster. If you cook it at a slightly lower temperature, this should help them cook at about the same rate.

Heat up your grill to about 450°F (230°C). Place both steaks on the grill, but with the New York strip closer to the heat. Sear both steaks for about 4 minutes per side.

Allow the steaks to rest after grilling for about 10 minutes. This will help the juices in the meat to set in the meat, giving you beautifully tender results.

What’s the bone in a porterhouse steak?

The lumbar vertebra is the bone that runs through T-bone and porterhouse steak. The’ t’-shaped bone makes the two meat cuts so unique.

What 2 steaks make up both porterhouse and T-bone?

New York strip and filet mignon are the two steaks that make up Porterhouse and T-bone. The filet tends to be larger in Porterhouse.

How do you cut a T-bone steak?

Use a sharp knife to cut off each steak from the T-bone. Slice each steak perpendicular to the bone, starting at the smaller end. This should allow you to cut against the grain to give you the best results.

How long should you cook a T-bone steak? 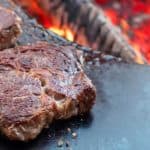 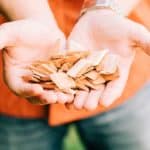 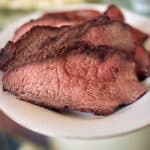 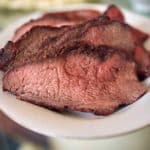 Smoked Top Round - Smoked top round cooked low and slow over oak wood for the perfect plate of barbecue beef. Prepared with an… ... 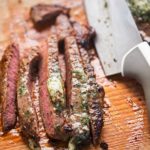 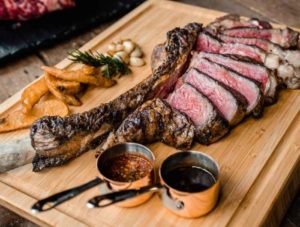 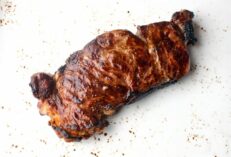 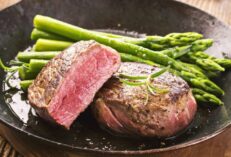 What is Eye of Round Steak? [Beef Cut Guide] 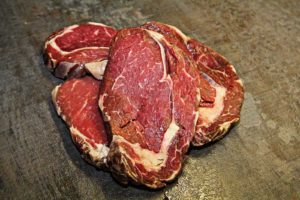 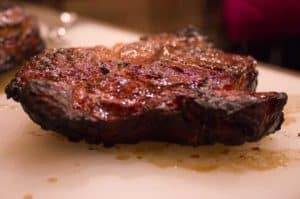