Beef shank is a lean cut of meat that yields an intense flavor when smoked, braised, or cooked sous vide style. Find out everything you need to know about shank’s taste and texture, how to prepare it, and what to look out for at the butcher counter.

Beef shank is a tough cut of meat, taken from the forearm and upper hind legs of the steer. With the right treatment and cooking process, we can turn that tough cut of beef into a tender plate of barbecue meat. Discover how to find the best shank cut, how to prepare it, and how to cook it the right way. Let’s get into it.

What is Beef Shank?

Beef shank comes from the legs of a cow, underneath the brisket at the front (the fore-shank) and the round at the back (the hind-shank). These portions of the steer take on a lot of movement, so are well-worked and rich in muscle fibers but low in fat and marbling.

Just like beef round, this low fat content can make the leg muscles tough and dry, but if we cook it low and slow through smoking, braising or sous vide, we can achieve a beautiful plate of beef.

The meat cut’s fat content is almost negligible, with one pound piece of beef shank containing only about one ounce of fat. While the low-fat content adds to limiting its use in traditional recipes, it also makes beef shank popular among people wanting to eat food high in protein and low in fat. For this reason, it’s one of the best cuts of beef for making jerky.

Shank’s texture is tough compared to other primal cuts of beef, and much more sinewy and lean. Since the fat content is minimal, there is not much marbling on beef shanks either. However, the traces of fat it does have appear as a handful of well-defined white streaks across the meat’s surface.

This positioning is crucial to characterizing the beef’s flavor and texture. Since cows either stay standing or keep walking for most of each day, the muscles around the legs don’t develop much fat and are lean and sinewy. A piece of beef shank comes from each leg of the steer, meaning that each cow yields four pieces of shank.

How to Buy Beef Shank

In the US, the beef shank is usually unavailable at smaller grocery stores and supermarkets. However, it can be easily found in stores with larger meat sections and at butcher shops. You can also place an order for beef shanks through your local butcher.

However, despite placing an order for beef shanks, it is still an inexpensive meet cut. Organic, grass-fed beef shanks can be bought for $4 per pound, whereas regular farm beef shanks only cost about $3 per pound. Besides the farm information, the labels for beef shanks also mention if they are fore-shanks or hind-shanks. But there is no significant difference between them, and both types are ideal for barbecuing and smoking.

How to Cut Beef Shank

While beef shank contains little to no fat, it can come wrapped in a thin layer of fat all around it. In some places, the layer of fat will be so thin that you can remove the meat along with the fat if you’re not careful enough.

Ditch your regular meat knife and get a scraping knife to get rid of this fat. Poke it in the beef shank from one side, depending on your dominant hand, and scrape it towards yourself while holding the beef shank tautly.

Keep rotating the shank and repeat the process from all around it until all the fat is removed. For excess fat on the corners, you can scrape the fat using the same knife upwards or downwards in gentle strokes while holding the shank with the other hand.

Once you have removed the fat around the beef shank, you can cut it in two different ways. The method of cutting should depend on how you plan to cook it.

The first method is the deboning method. For this method, you will have to cut straight through the length of the bone until you reach the bone. After that, you will need to take a deboning knife and make small cuts between the bone and the muscle.

Make such cuts all around the bone to completely debone the beef shank. You can then use this boneless beef shank in various barbecue recipes or even make lean ground beef from it. The bone can also be utilized separately to make beef bone broth. Beef broth can also be used in several recipes, especially those of stews and soups.

The second method of cutting a beef shank requires a butcher’s knife. Using this knife, you can make thick cuts through the width of the beef shank. It will result in boned pieces which can be roasted or smoked as a whole. You can further slice these pieces into one or two-inch-thick boned steaks. These boned steaks may take longer to grill, but they result in flavorsome steaks due to the presence of bone in them.

On the other hand, if you’re looking for beef shanks to make lean mince from them, you can do the same with eye round or rump roast meats. Eye round and rump roast cuts contain minimal fat, and mince is almost as fat-free as beef shanks.

How to Smoke Beef Shank

Beef shanks can be barbecued either on the regular oven or in the smoker.

After three hours, raise the smoker’s temperature to 300°F and let the shank smoke without cover until its internal temperature reaches 200°F. The thermometer would easily slide in the meat at this point. Take the beef shanks off the smoker and let them rest for 45 minutes before serving them as the star of the meal.

You can also barbecue beef shanks in a regular oven by preheating the oven to 325°F and preparing a casserole dish. The dish should contain beef broth with any spices that you want to use to flavor the beef shanks. The casserole should have enough broth and spices that beef shanks get half-submerged in them.

The time would be affected by the size of the casserole dish and the number of beef shanks placed in it. Once thoroughly cooked, you can thicken the leftover beef broth in a pan and sear the beef shanks in it for a minute before serving.

Mashed potatoes and steamed vegetables are popular side dishes to braised and smoked beef shanks. At times, it is also served with thickened beef broth or gravy for a more flavorsome meal.

However, the possibilities to serve a well-smoked beef shank are endless, and you can try different sides according to the spices you used to braise it while smoking. The different spice combinations can bring out different flavors that will pair well with various bread and vegetables.

It can also be served in a stew with thick-cut roasted vegetables and eaten with bread or served over a bed of rice or buttered garlic mushrooms. 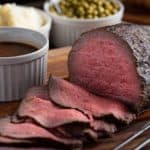 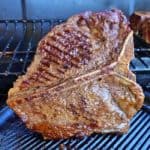 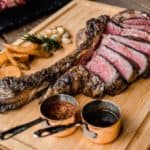 Tomahawk Steak Guide: What Is It, Where to Get It, How to Cook It - Tomahawk steak is an unusual cut of beef rib that makes a statement on any BBQ plate. But what is… ... 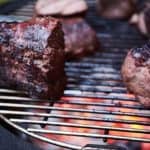 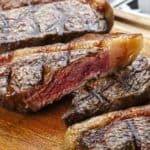 Grilled Picanha [What Is It & How to Grill Brazil’s Best Beef Steak] - Picanha steak is the highlight of any Brazilian BBQ. Find out everything you need to know about one of South… ... 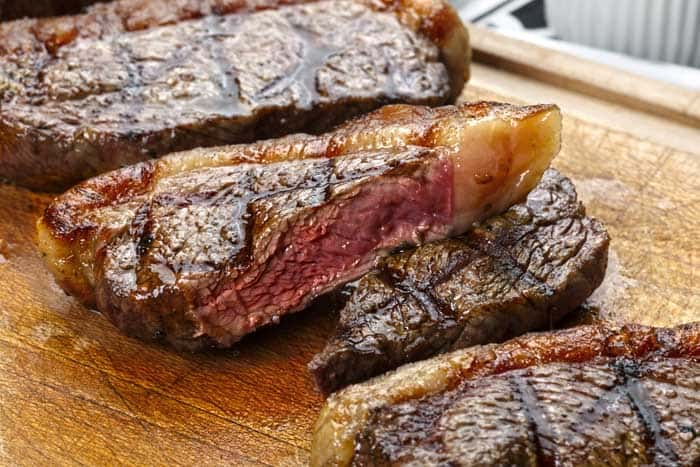