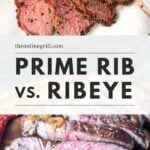 What are the characteristics of prime rib vs ribeye? Knowing the difference between different cuts of meat when you are not a butcher or a meat expert can be tough. They have their differences, and you may prefer one over the other.

So, how do you tell them apart? Prime rib and ribeye are both well sought after cuts of beef. They are superior quality cuts of meat with great flavor.

In this article, we take a look at prime rib vs ribeye and what distinguishes the cuts, setting them apart. We take a look at what part of the cow they come from, the flavor they bring to the table as well as some of the best ways to cook them that will bring out that particular flavor. Let’s dig in shall we?

What is prime rib?

Prime rib is a massive and juicy cut of beef that comes from the rib section of the cow (called the primal rib). It can contain between two to seven ribs, offering you a good deal of choice with how big a cut of prime rib you want to cook.

It’s also known by the name standing rib. This is because it is sometimes cooked effectively ‘standing’ on the rib bones to prevent the meat from coming into contact with the pan. The prominence of the rib is one of the characteristics that separates smoked prime rib from ribeye, which is boneless and just comes as a steak.

Prime rib is often thought of as a holiday meat, making it great for Thanksgiving or Christmas. I’d argue that it’s great all winter and an underrated cut of beef for smoking during the summer.

Regardless, this is a statement meat for sure. A large cut of prime rib can stand as the centerpiece of your dinner table, with the beef sitting succulently on the bone.

It is often more expensive than ribeye, but it is juicy, tender, and large enough to justify the price.

Where does prime rib come from?

Prime rib – as the name suggests – comes from the center of the primal rib area of the cow, cut from the 6th to 12th bones of the ribcage. It’s a huge cut of beef that is often served with the bone. It also just happens to be the best part of the rib section on the cow.

Why is it called ‘primal’ rib? Well, when beef is carved, it’s usually done so into eight sections, called primal sections. Each of these cuts is then sent off to butchers, sellers, or manufacturers for further butchering.

The primal rib area on the cow is beautifully tender and rich in meat (just look at the size of some of our beef rib recipes). Crucial to this is the big section of marbled meat at the center of prime rib, also called the ‘eye’. When smoked or roasted, this section is moist and rich in flavor.

Thanks to the rich fat and marbling content around the cow’s ribcage, the primal rib is often thought of as the most flavorful beef cut.

For this reason, roasted or barbecued prime rib is extremely tender and carries a strong beef flavor. Also, because it’s cooked with the bone in, it also means that the flavor is quite robust and strong. When slow smoked for five or 6 hours, it’ll cook in its own juices, locking in flavor.

Where to buy prime rib

Prime rib can be bought from some high-end stores, but you might find it sold as ‘Standing Roast’ or ‘Bone-In Rib Roast’. Your best bet however will be to turn to your local butcher, where you’re more likely to get a better quality cut, with more marbling.

The good news is that you can always turn to the internet for a little help. Our favorite online vendors both stock beef prime rib, and can deliver upon purchase.

How to cook prime rib steak

Prime rib is a thick cut of meat. This means that it will need more cooking time for it to be cooked, depending on how you like your meat. The thickness of the meat also means that you will need to slow cook it so that it is adequately cooked, through and through.

Prime rib does better with a slow cooking method and longer hours. This makes it a great candidate for smoking. Cooking it on a low, consistent heat for more extended periods, are just the optimum conditions for smoking meat.

The thickness of this cut tells you that you can not flash fry it. A slow grill with a consistent low temperature will do. This also helps to bring out the flavor of the meat, which is already superior.

Ribeye is a juicy part of the cow, succulent with lots of flavor. This juicy piece of steak is straightforward to slap on a grill and cook quickly. It’s easier to cook than prime rib, and is more affordable. It has a high level of fat marbling content, and the cuts are smaller, especially when compared to prime rib.

Where does ribeye come from?

This cut of beef comes from the cow’s rib area. This is one of the reasons ribeye and prime rib look so similar. However, ribeye has more meat and less bone on it. When you look at it, it is a steak.

Learn the differences between New York Strip and Ribeye

The extra marbling in ribeye gives it a smooth texture and taste. The flavor is milder than prime rib. Regardless of how much effort you put in, the prime rib still has a lot more flavor than a ribeye. It has extensive marbling when compared to prime ribs. However, the texture is tougher than prime rib cuts. Ribeye does not have bones and is often described as being boneless. The marbling makes for a great steak that only needs searing.

How much does it cost?

Ribeye is more affordable than prime rib. It is generally smaller in size than prime rib cuts, but even when you have the same size that looks like prime rib, it is still a cheaper cut by the kg.

How to cook ribeye

Ribeye does not need as much cooking time as prime ribs. You can simply sear ribeye on a stovetop or a grill, and cook it to your satisfaction. Ribeye does well with medium to high temperatures, which can quickly be done on the grill.

This is one of those cuts of meat that will not need a lot of time to be cooked. A few minutes will do the trick, meaning that you can slap it on the grill as your dinner guests wait.

Both beef cuts are very flavorful and well sought after. The differences between the two will govern how to cook them and also help you know what to expect on your plate. The quality of meat is superior, and you will enjoy it either way.

The takeaway here is that if you want a festive looking cut, go for the prime rib, but be ready for more time in the kitchen. If you are after a steak ribeye delivers a similar flavor, but it’s smaller in size. 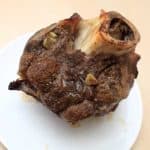 What Is Beef Shank? [Buying, Prep & Cooking Guide] - Beef shank is a lean cut of meat that yields an intense flavor when smoked, braised or cooked sous vide… ... 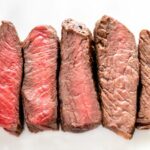 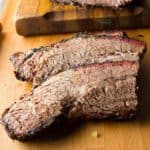 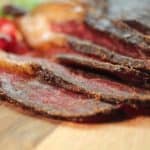 4 Best Cuts of Beef for Jerky (and How to Make It) - Ready to make your own homemade jerky? Get the lowdown on everything you need to know for choosing the best… ... 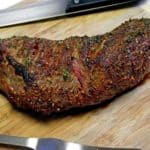 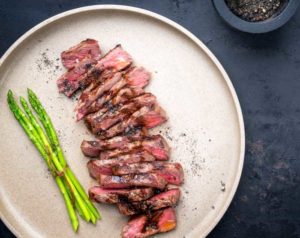 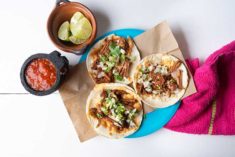 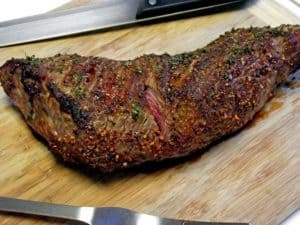 BBQ Smoked Trisket [What is it? + Recipe] 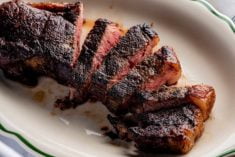