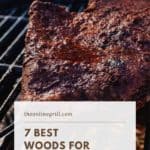 To get the very best possible results it’s important to pick the right wood to smoke with it. But with a lot of varieties of wood out there, how should you know what to choose? Here are my top 7 picks for the best wood for smoking brisket.

Brisket is a cut of meat that goes perfectly with the aromas and flavors you get with BBQ smoking. It has soft and tender textures that make it perfect for absorbing moisture and smokey flavors. This is what makes it one of the world’s best smoking meats.

Our Top 3 Woods for Smoking Brisket

Brisket is one of the most popular cuts of meat for barbecue, and quite often used as the food to use as a benchmark for comparing other BBQ and pitmasters up against each other.

When cooked right there are few cuts of beef better. Its meaty fibers are housed under a thick fat cap that melts away as it cooks. This gives it a tough but also beautifully tender texture.

To get it right, it has to be smoked for a long time at a low temperature. It also has to be matched with the right kind of wood to help enhance its flavors without overpowering them.

Choosing the best wood for brisket will determine if your final product is soft, tender and flavorful… or just a mess.

If you’re looking for a simple option then either oak or hickory are the best to go for. Other favorites with BBQ smoking enthusiasts are pecan, apple, mesquite, maple, or olive.

One of oak’s strengths is that it produces a smokey flavor that matches wonderfully with beef brisket. It’s long been a popular wood choice, partly owing it to it being one of the easiest types of wood to use on a smoker.

One of the reasons for this is that it has a long potential burning time, meaning that you don’t need to tend to or babysit it as much as you would for other types of wood. Not only this, but it has a flavor profile that’s far more subtle than other popular kinds of wood, like hickory or mesquite. This means that you can match with it other types of wood to produce a more fully rounded taste.

A white oak variety that creates plenty of heat and smokes both as fire and smolder. White oak in particular is a great smoking fuel.

When choosing a good oak wood, we want something that creates plenty of heat and smokes both as fire and smolder.

This white oak variety from Smoak Firewood Cooking does just that. White oak in particular is a great smoking fuel.

These logs are large. This isn’t a problem if you’re using oak as your primary smoking fuel, but if you’re hoping to use it as a secondary flavoring wood then you ought to consider something else. I don’t consider this a big loss however, as oak is a far better primary fuel than it is secondary.

They comes in several sizes, allowing you to either buy in bulk or start more modestly. They also start at a very affordable price so you’re not breaking the bank if this is your time buying smoking logs.

Hickory remains one of the world’s most popular types of wood for smoking and barbecue, mainly due to its beautiful nutty flavor. It’s available almost everywhere, so in the case of brisket it makes for an excellent fallback option if you can’t find anything else. That said, it’s still an excellent choice.

It has an oak-like flavor that’s not as strong as mesquite. Despite this, if you use too much of it then you do still run the risk of letting it overpower your meat with a very defined bitter taste.

Try not to go overboard. Try to tone it down by using slightly less of it, or even by diluting it with some applewood.

Hickory is smokey, but packs in a more pungent flavor than oak. People might prefer this, but one of its drawbacks is that the smoke it emits isn’t as clean as oak.

If you’re planning to smoke your brisket hot and fast, and only for around 2-3 hours then a blend of hickory and oak is a great way to go.

If you want to go for something that packs in a denser flavor, hickory might be the wood for you.

Hickory goes great with brisket. The tough meaty fibers of the brisket mean that it can stand up to the strong and rich flavors of hickory, and can absorb them beautifully.

Where better to turn than Weber? The German brand have been making excellent BBQ grills for years, so they know a thing or two about making great BBQ fuel.

These hickory wood chips from Weber can be used alone as a primary fuel source, but can also be matched with oak if you want to make something a bit milder.

Each bag is just a couple of pounds in weight, which means you can easily start small to test them or go large and buy in bulk. Each wood chunk is uniformly sized at three inches, and is just as solid and dependable as you’d expect from a brand like Weber.

This is one of the most commonly used types of wood out there for smoking, particularly for brisket. It’s one of the staples of Texan smoking, and for good reason. It’s a pungent wood that packs in a very intense flavor.

One of the flaws in mesquite is that it does tend to burn through quite quickly, so you’ll need to use a good amount if you’re cooking a particularly large cut of brisket.

If you’re unsure about pairing an intense wood like mesquite with brisket, then what I’d recommend is mixing it with a softer wood. For example, you can dilute it by mixing it with apple wood to give it a softer edge without compromising too much on overall flavor.

Definitely not for everyone, but pecan produces a beautifully sweet and rich flavor that, in my opinion, works brilliantly with BBQ brisket.

If you want to dial down its sweet aromas a bit, then you can temper it with some oak to even it out.

Maple is another great wood for newbie smokers. It’s a mild log that imparts a light smoky and sweet taste on brisket without ever overwhelming it with its aromas.

What I particularly like about maple is that not only does it go really well with brisket, but also other types of meat. I’ve used it to great effect with poultry and pork.

I’ve mentioned apple wood a couple of times already on this list, but I also wanted to mention it in its own right as well.

It’ll come as no surprise that it has a lovely fruity and sweet flavor, but it’s also a great diluter for use with other woods to try and even out any strong flavors. It goes beautifully with brisket, but also as a wood for smoking turkey, ham and chicken.

If you prefer something with more nuanced flavor and that offers something a little sweeter, then a fruity wood like apple could be a great choice.

Applewood tends to emit dense smoke, which is great at infusing the tough textures of brisket with flavor. It’ll add a sweet flavor and a more subtle layer of fruitiness.

This can be used as both a primary or secondary fuel, either forming the focal point of your smoke, or it can be added to oak to add notes of sweetness.

These chunks come in at about 4 inches, and come in a 10-pound bag, so plenty to get you started, at a very affordable price.

Olive wood isn’t always the first to come to mind for people choosing wood for smoking, but I think it deserves to be mentioned. It’s a far more mild alternative to mesquite, in that it features a fairly similar flavor profile but just isn’t anywhere near as overpowering.

As well as brisket, it goes beautifully with poultry and even, if you’re feeling brave, fish.

What wood size to choose

Before deciding on flavor, I think it’s also important to take size into consideraton. In general, there are three different sizes of wood to choose from.

Wood for smoking brisket on an electric or pellet smoker

While offset smokers do tend to be the choice of more seasoned BBQ pros, the truth is that a lot of home users tend to use electric or pellet smokers. There’s absolutely nothing wrong with this, but it’s important to know how this can affect your cooking.

While offset smokers tend to product a consistent stream of smoke, electric smokers tend to emit smoke in waves or billows. What this means for your meat is that it’s more difficult to impart a strong smoke flavor on the meat, particularly one with subtle nuances.

Learn how to smoke brisket in an electric smoker

As a result, if you’re using a mild wood like oak then you run the risk of the final flavors being quite weak.

To get around this I’d recommend mixing in a bit of hickory to try and kick up the flavor profile a bit. Electric smokers are limited, so hickory will help you get more out of the smoke that you do have to play with.

If you’re still unsure about hickory, then try to infuse it with other types of wood: Pecan, apple, mesquite, or cherry. The sweet notes of cherry and apple give a fantastic balance to the more grounded smoky aromas of the oak. Brisket is a tough cut of meat comprised of tough fibers. To break these down and tenderize them, they need to be exposed to exactly the right kind of smoke.

Both oak and hickory offer a dense and heavy flavor profile that will smolder for the duration of your smoking, helping to break down the stubborn fibers of the meat. 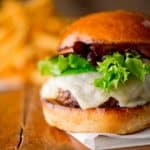 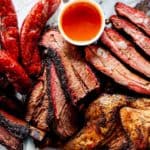 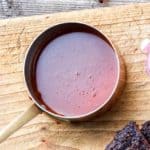 Beef Brisket Injection: Best Recipe & Guide - Injecting marinade into your brisket is one of the best ways to improve the moisture, texture, and flavor of your… ... 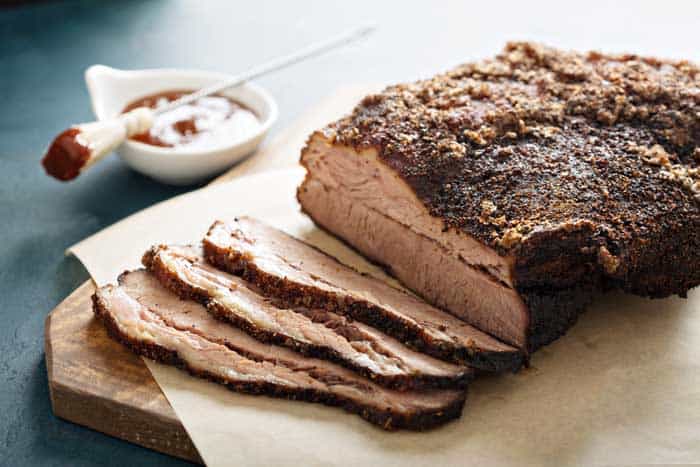 What is Brisket Bark? How to Get it Right 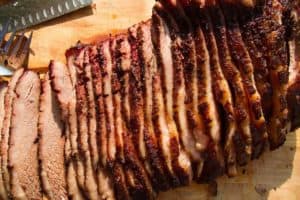