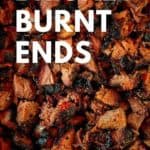 These perfect BBQ brisket burnt ends are sticky, juicy, and saucy. They make the most of the best part of the brisket, and are soft and melt-in-your-mouth delicious.

Sticky, juicy, sauce, soft brisket burnt ends. Super soft and melt-in-your-mouth delicious. These little chunks of beef make the most of the best part of the brisket, and elevated when combined with smoke and BBQ rub.

What are Burnt Ends?

Burnt ends come from the fatty point end of the brisket. The brisket point contains a lot of marbling (the intramuscular fat found in meat muscle), infusing the meat with outrageous flavor as it renders during smoking. Slowly rendered fat. So much juice. So much flavor. Delicious.

And there seems to be a reason for that catchy name too. It started life as a menu special at BBQ grills and restaurants as they wanted to make better use of the crispy ends of briskets. So they gathered them during the week, layered them in sauce, and served them alongside bread.

Their popularity soared, and now the dish has become a staple across the country at many BBQ joints.

The recipe has now developed so much that it’s now no longer made from brisket leftovers. We can actually purposefully make them from scratch, making them even fresher and more delicious.

And boy are they good. They have everything great about brisket, stripped back to delicious little cubes that are rammed full of juice and flavor.

How to Make Brisket Burnt Ends

When buying your brisket, if you’re able to find just the point of the brisket then you’re in luck. This isn’t easy though, so what you might want to do is simply buy a whole brisket, containing both the flat and the point.

Start by trimming the brisket. While the essence of the burnt ends does come from the fat content, there’s a lot on the brisket that we just don’t need. So we need to trim it.

Pro Tip: Don’t immediately throw away the fat. It can be used to help beef up other types of BBQ meat, like hamburgers.

Using a sharp chef’s knife, you’ll want to cut the brisket in two along the layer of fat that separates the flat and the point to separate them.

Once you do that, you can put the flat to one side and get to work on the point. You’ll see a lot of fat sitting on the point, so start to carve that off so that the actual meat is exposed.

Don’t worry – there’s a lot of marbling in the point, so we won’t run the risk of not having enough fat to render when cooking. All the fatty layers that sit on the point just aren’t needed.

After you’ve removed the excess fat from the point, we’re good to go. No need to cut it up – we’re going to cook this thing whole. This will allow us to develop a good bark on it before then cutting and cubing it up afterward.

We’ll then season it with our choice of rub. To get the best out of it, brisket needs a good amount of salt and pepper on it, so try to pick something along those lines.

Apply the rub generously on both sides (seriously, don’t be shy with this stuff).

We’re not going to stop there though. As well as salt and pepper, we want to infuse our brisket point with a classic BBQ rub. Anything that’s in line with your preferences is fine, particularly any kind of BBQ beef rub.

If you’d like something with a bit more punch or flavor but don’t know where to start, then there are plenty of great store-bought BBQ brisket rubs out there that will work great for burnt ends.

As for wood, I’d keep it simple and opt for oak or hickory. No need to be clever here with flavors. Hickory and oak both allow us to add a little bit of smokey flavor to the brisket without overpowering it and without letting any other flavors distract from the meat itself and our rubs. They’re both often our standard go-to options when choosing smoking woods for brisket.

Get your coals going in a charcoal chimney. They’ll be up and running in no time, and ready for you to transfer to your smoker’s firebox.

Place the point on the grates of your smoker, with the side you want to develop bark on facing upwards.

After about four hours, your brisket should have developed a good bark on it.

The key here is to develop the brisket so it’s soft. Not mushy, but so that you can put a probe in it with little to no resistance. 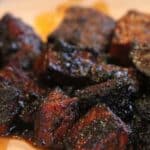 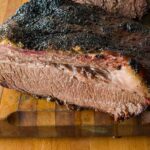 How to Rest Brisket - Serve up the best smoked brisket by getting meat resting right. From faux Cambro to resting times, discover how to… ... 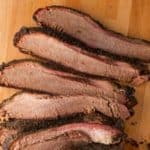 How to Smoke Brisket in an Electric Smoker (8 Easy Tips & Recipe) - Smoked brisket is one of barbecue’s best meats. The good news is that you can replicate the tender and juicy… ... 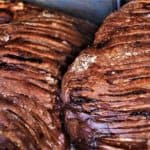 How to Reheat Brisket Without Drying It Out (6 Easy Ways) - Brisket is tender and rich in flavor when fresh off the BBQ smoker, but leftovers can often be dry and… ... 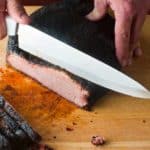 5 Best Knives for Slicing Brisket [Beef Carving Knife Reviews] - Getting a good brisket knife is the best way to ensure that your barbecue smoked beef is perfectly sliced once… ... 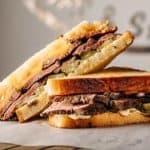 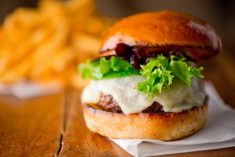 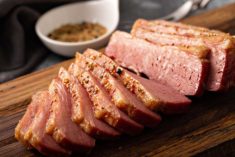 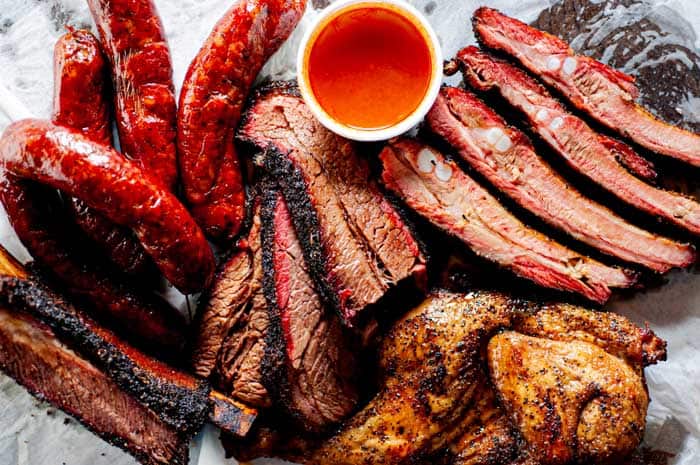 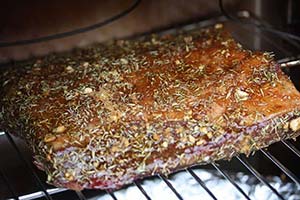 Should You Smoke Brisket Fat Side Up or Down? 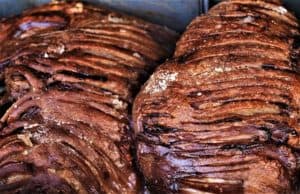